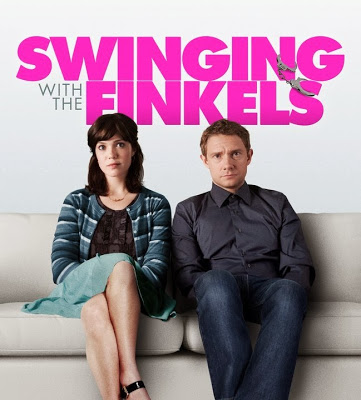 2011 saw the release of the independent downtrodden comedy ‘Swinging with the Finkels’ come and go–probably because of the odd title–and then revive itself on Netflix. After months of passing it by and then flippantly adding it to my Netflix queue, I finally broke down and decided to give it a chance.

At a glance, and after reading the synopsis–an American whose 10-year marriage an Englishman has gotten stale and predictable. With help from their quirky friends, the former lovebirds consider swinging to reignite their passion–a person can tell by the cover alone that it is going to be some cheesy British-American hybrid version of ‘Say Anything’ where the main characters Sarah and Alvin Finkel played by Mandy Moore and Martin Freeman, respectively (an odd couple indeed), make up and break up and in pouring rain have a revelation that they belong together. Ok maybe that’s The Notebook … but you get the idea.

When finished watching it, however, my opinion changed half-heartedly. I’m not saying that I was still wrong for basing the cover of the movie by its content and by no means is it the best movie of the year. What I am saying is that this movie is decent, funny, and just heart breakingly sad enough to spend an enjoyable ninety minutes on.

Here is why. The romantic chemistry between wayward actress Mandy Moore and the slightly-seasoned Martin Freeman is just palpable enough to have viewers believe that they have been married for ten years and that whatever passion that was in their marriage before the camera opens the movie has, indeed, faded. It proves to be a well-grounded and realistic view of marriage and not some picture perfect suburban couple with high end jobs and well rounded friends. This is a movie that focuses on the ‘after’ in Happily Ever After as Sarah (Moore) has a conversation about the state of her sexless boring marriage to her husband Alvin (Freeman).  With advice from friends and even relatives (a comedic bit involving Jerry Stiller) Sarah tries to do what any other woman and man would do when signs of a broken marriage pop up; she gets lingerie. Meanwhile, Alvin talks about this problems in marriage to his guy friends who suggest that he dress up as a fireman because women like a man in uniform.

Sarah and Alvin try many different methods to spice up their marriage (a risqué scene with a cucumber for Sarah is both awkward and funny) but the frustration and lack of hope to resolve their issues of longevity is a constant reoccurrence that bubbles and bursts in the climax  turning the movie into something you never see coming at the beginning.

My verdict is that this movie was a smart, semi-predictable, independent movie that tried to pass itself off as a modern day romantic comedy. Though lacking fresh, revolutionary ideas it is still worth the watch.